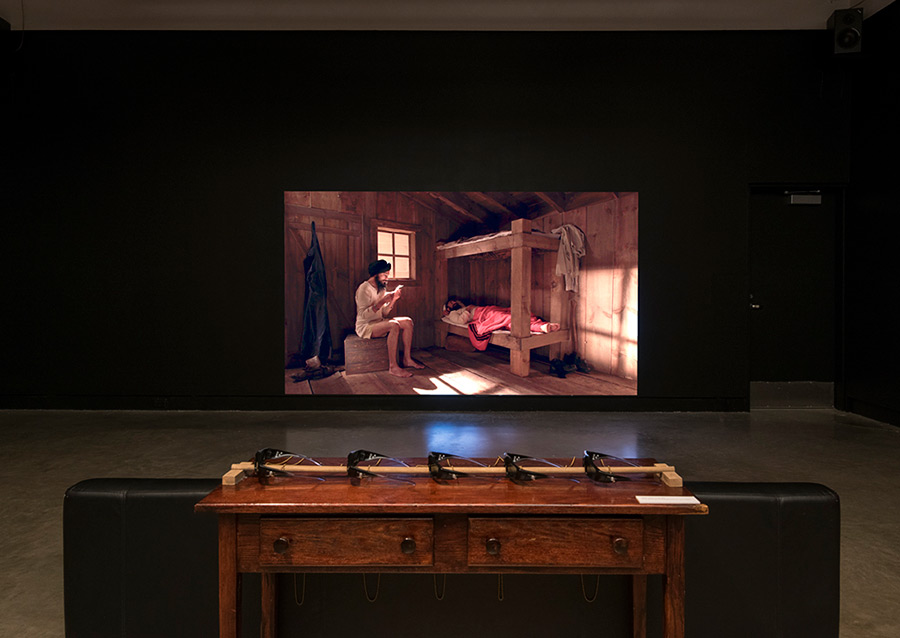 Fair Play is a quiet, enigmatic and immersive encounter with history and technology. it is devoid of speech and the figures are mainly motionless.

Set in 1914, this 7-minute long stereoscopic-3D-cinema installation turns our attention away from the ship’s passengers to those South Asians already on shore. As Kazimi explains, “I wanted to bring to life these moments that have no visual record. the scenes are of ordinary people whose lives were irrevocably changed by the arrival and turning away of the Komagata Maru.” the film encompasses ten quiet, meditative vignettes that provide windows into the private lives of South Asians on shore. “these seemingly ordinary scenes, located in an historical Canadian landscape, are made extraordinary,” says Kazimi, “by the presence of South Asian men claiming their Canadianness.”

Kazimi’s still-moving images borrow from some of the compositional strategies of early twentieth century American painter Edward Hopper. Kazimi has described how Hopper’s images capture the loneliness and melancholy that many of these South Asian men would have experienced in the frequently isolating and, in many cases, racist settings in Vancouver. The installation Fair Play also includes a small, modified, early 20th century stereoscope viewer. the visitor to the gallery peers into the viewer to see a selection of photographs of British India reproduced from the Glimpses of India (Keystone, 1908) stereoview series transferred onto video slideshow inside the apparatus. With their combination of portraiture, landscapes and temple architecture, these stereoviews were commonly found in parlour rooms across the empire and would have been, in many cases, a person’s only glimpse of the subcontinent, its culture and landscape. In Kazimi’s Fair Play installation, these exotifying images provide a jarring counterpoint to the realistic everyday portrayals of Indo-Canadians in ordinary north American urban settings. the disjunction built into the artwork draws attention to the gap in understanding that fueled the events that led to the Komagata Maru episode.

Hanging on opposing walls of the installation room are the old colonial flags of the Dominion of Canada and British India, both drawn from the British naval ensign, but each made unique through the addition of the Canadian coat of arms and the Star of India. the flags evoke the colonial context of both India and Canada, which the men featured on the projection screen would have felt on a daily basis. the title of the work references the British empire’s claim of “equality and fairplay” that was frequently evoked in official speeches across the dominion, but also frequently undermined in official policy, as had been the case with the “continuous Journey” legislation designed to keep the Komagata Maru’s passengers from landing in canada.

Sound is a critical component of Kazimi’s installation. the artist uses maritime sounds such as boat horns, seagull squawks and resonant ocean sounds to evoke the harbour beyond the frame of the camera. yet, he does so in a way that is not naturalistic. the sounds are frequently incongruent with the visual content of the images thus drawing attention to the discrepancy between the outside world and the alienated interior life of these mostly male individuals. but, Fair Play can be said to be contrapuntal in another sense described evocatively by Edward Said:

Seeing ‘the entire world as a foreign land’ makes possible originality of vision. Most people are principally aware of one culture, one setting, one home; exiles are aware of at least two, and this plurality of vision gives rise to an awareness of simultaneous dimensions, an awareness that—to borrow a phrase from music—is contrapuntal.”

Through its folding together of old and new media and careful compositional technique, Kazimi’s video vividly captures Said’s notion of a double awareness

Lasting Legacy: the Winners of the 2019 Governor General’s Awards in Visual and Media Arts

Created with the support of a New Media Fund grant from the Canada Council.